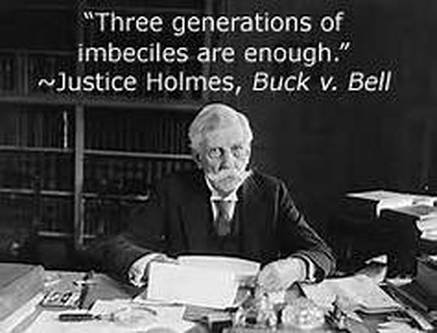 Eugenics-Giving the "Fittest" a Fighting Chance 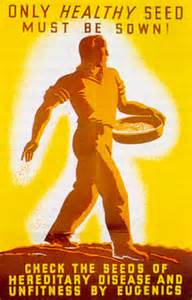 The idea of "survival of the fittest" perpetuated by Social Darwinists in the early 20th century culminated in the practice of selective breeding and sterilization or eugenics.  Sir Francis Galton, a cousin of Charles Darwin, is considered
the father of eugenics. Galton used quantitative measures and statistical tests to study breeding and seek its improvement.  He developed a classification system which he used to measure the range of intelligence in different human race populations.  Eugenicists argued that "defectives" should be prevented from
breeding, through forced sterilization. Vasectomy and tubal ligation were favored methods, because they did not alter the reproductive organs themselves. Sterilization allowed the convicted criminal or mental patient to participate in society, rather than being institutionalized at public expense. 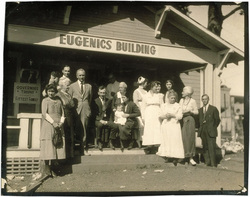 This law would serve as the blueprint for several U.S. state sterilization laws as well as for Nazi Germany's infamous 1933 eugenics law, The German Sterilization Act .

This Supreme Court case involved a young girl, Carrie Buck an 18 year old patient at the Virginia State Colony for Epileptics and Feebleminded.  A petition was filed by the Colony superintendent to sterilize Buck as a determination of whether new sterilization statutes would pass a legal challenge.  Carrie was said to have the mental age of an 8 year old.  Her mother, a prostitute, also had a similar mental acuity.  After giving birth to an illegitimate child, (it was later revealed that she was the victim of rape), Carrie was committed and deemed unfit to continue to have children.
Justice Oliver Wendall Holmes wrote the ruling in favor of sterilization of Ms. Buck:
“ We have seen more than once that the public welfare may call upon the best citizens for their lives. It would be strange if it could not call upon those who already sap the strength of the State for these lesser sacrifices, often not felt to be such by those concerned, to prevent our being swamped with incompetence. It is better for all the world, if instead of waiting to execute degenerate offspring for crime, or to let them starve for their imbecility, society can prevent those who are manifestly unfit from continuing their kind. The principle that sustains compulsory vaccination is broad enough to cover cutting the Fallopian tubes. ”

He concluded his remarks by famously saying; "Three generations of imbeciles is enough."