Immigration in the Early 20th Century 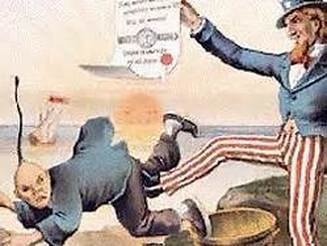 As the 20th century began, many in the upper class of the United States began to see immigration as a potential danger to their ideal image of a pure "American race".  Having passed the Chinese Exclusion Act in 1882, Congress reinforced the idea of "Yellow Peril" which would affect immigration of Asian ethnicities into the 20th century.  The Chinese Exclusion Act was not repealed until 1943.  The next attempt to limit Asian immigrants  to the United States came as a gentlemen's agreement was reached with Japan to prevent its citizens from obtaining passports to come to America. 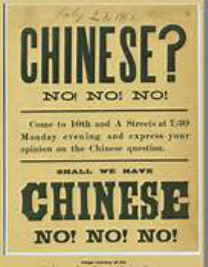 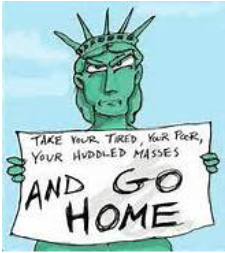 At the end of the 19th century, the Immigration Restriction League was founded upon principles of limiting the influx of Eastern, Central and Southern European Immigrants to the United States.  Their focus would eventually broaden to include the mentally handicapped, insane and physically inferior potential immigrants, who could potentially bring and spread disease to the American gene pool.  Immigrants from Northern and Western Europe were looked at as the ideal American citizens, possessing the physical and mental qualities desired to perpetuate the Anglo-American race.
The Immigration Act of 1924 limited the annual number of immigrants admitted into the United States to 2 % of their native country's population in America, according to the 1890 census.  This census was used because it pre-dated major waves of immigrants from these regions, and more specifically, Jewish immigrants.
Immigration Act of 1924 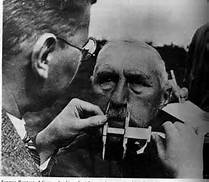 Between 1907 and 1910 the Dillingham Commission, established by the U.S. government, and headed by Republican Senator William Paul Dillingham, completed a study whose findings reflected the opinion of many Americans that immigrants from eastern and southern Europe were less desirable than  immigrants from western and northern Europe.  The findings of the commission were used as the foundation for the  immigration legislation in the 1920's.  Recommendations of the committee were:
1. new immigration legislation should "look especially to the economic well being of our people."
2. Industry should not be promoted to the detriment of wage levels and conditions of employment.
3. A five-year period of deportability for immigrants accused of serious crimes, and three-year period of deportability for those who become public charges.
4. Continuation of restrictions on Chinese, Japanese, and Korean immigration
5. Further restrictions on unskilled immigrants.
6. A literacy test as the best means of restricting immigration.

"We must Americanize in every way, in speech, in political ideas and principles, and in their way of looking at relations between church and state. We welcome the German and the Irishman who becomes an American. We have no use for the German or Irishman who remains such..... He must revere only our flag, not only must it come first, but no other flag should even come second."